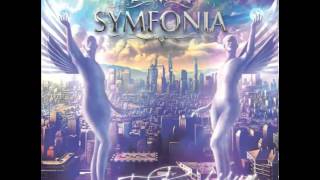 Personnel: Andre Matos (vocals); Timo Tolkki (guitar); Mariano Dapor (cello); Mikko Harkin (keyboards); Uli Kusch (drums); Antti Lappalainen, Elisa Hujanen, Juha P„lve (background vocals).
Audio Mixers: Giovanni Nebbia; Timo Tolkki.
Recording information: J„garestudio; Studio Mega, Sweden; Studio Redhouse, Finland; Transformers Studio.
Photographer: Jussi Eerola.
There isn't anything subtle about In Paradisum, the debut album from the international supergroup Symfonia, whose members r‚sum‚s include stints in Stratovarius, Angra, Helloween, and Sonata Arctica. Fronted by Brazilian vocalist Andre Matos (whose high-pitched voice resembles Journey's Steve Perry's more than a little), they come roaring out of the gate with "Fields of Avalon," a complex, guitar-and-keyboard riff anthem, that acts as a manifesto for the rest of the record. Its progressive knottiness is led by the combined frontline of axeman/producer/bandleader Timo Tolkki and keyboardist Mikko Harkin. That complexity is given earthiness by the double- and triple-timed drum attack of Uli Kusch, supported by the overamped, thrumming bassline of Jari Kainulainen. This set is all excess, all the time. "Santiago" reveals signature near-chanted choruses -- Matos' voice is multi-tracked exponentially -- even as Tolkki's guitar riff comes straight from Mot”rhead's Ace of Spades album (though the production is much slicker). The dynamic balladic moments in the tune's middle section, with a fingerpicked guitar interlude and the a slow, elegiac bridge, lead to a scorching guitar solo before a return to the chorus adds to the fun. Yes, fun. Symfonia may take themselves very seriously as musicians, but they also understand that a bit of overwrought camp is a good idea when making a metal record. Check the near-operatic vocal chorus in the the first of two power ballads, "Alayna," and the keyboard strings and drum loop in album closer "Don't Let Me Go." These are feints, of course, and serve as dimensional and textural elements because the rest of the album is a shiny, crystalline display of sheer, European, melodic heavy metal. In the title cut, a balladic lyric is revealed only after an intense intro of pure pomp, and there's a lengthy labyrinthine display of pure instrumental prowess. Despite its title, "Rhapsody in Black" has an irresistible hook with a staggering guitar break. As a debut, In Paradisum is a portrait of all of power metal's self-indulgent grandiosity, balanced by sophisticated melodies, instrumental sophistication, and a very accessible production style. The Journey comparison above goes further; had the American band been born in the 21st century in Europe as a metal band, they would no doubt have sounded much like Symfonia. ~ Thom Jurek