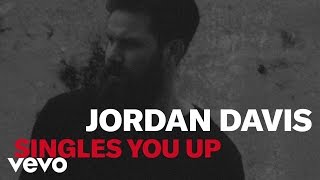 Personnel: Paul DiGiovanni (acoustic guitar, electric guitar, banjo, programming, background vocals); Ilya Toshinskiy, Bryan Sutton (acoustic guitar, banjo, mandolin); Derek Wells (electric guitar); Matt Cappy (trumpet, flugelhorn); Nir Z (drums, percussion); Jason Gantt (programming); Katie Stevens , Austin Jenckes, Jonathan Singleton, Heather Morgan (background vocals).
Audio Mixer: Jim Cooley .
Recording information: Front Stage, Sound Stage Studios, Nashville, TN; Gradwell House Recording, NJ.
Photographer: Eric Ryan Anderson.
There's a sense of good cheer that permeates Jordan Davis' 2018 debut, Home State. It's not just that it seems like he sings with a smile on his face: the album's blend of modern pop, R&B, and country positively glistens, generating a bright, chipper energy that makes even the ballads seem sunny. Such positivity sometimes threatens to spin Home State into motivational music for daytime drudgery -- it's a tonic for the office, commute, or housework -- but that's where Davis' friendliness works in his favor. When the tempos are swift and the production bustling -- "Take It from Me" and especially "Singles You Up," a frothy bit of country-pop that leaves a surprisingly indelible imprint -- he seems to be the ringleader at happy hour, but when things slow down, as they do on "More Than I Know" and "Made That Way," he seems sensitive. Davis can be at the mercy of his material -- too much of Home State doesn't rise above the pleasingly generic -- but when he gets his hands on the right songs, he's an ingratiating and ultimately endearing singer. ~ Stephen Thomas Erlewine

Mitchell Tenpenny
Telling All My Secrets
$10.90
Add to Cart