Superboy's third season brings with it new cast members and a new direction as Clark and Lana investigate aliens and the paranormal for The Bureau of Extra-Normal Matters. 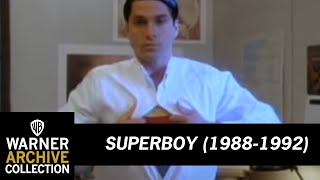 The Boy of Steel's third season ushered in more changes as the show redefined itself for a new decade. Most prominently, the show was now named The Adventures of Superboy, linking Superman's TV past to Superboy's TV future. Leaving Shuster U behind, Clark (Gerard Christopher) and Lana (Stacy Haiduk) take on internships at The Bureau of Extra-Normal Matters in Capitol City, a government agency dedicated to investigating aliens and the paranormal. Working alongside fellow bureau member Matt Ritter (Peter Jay Fernandez) and under bureau chief C. Dennis Jackson (Robert Levine), Clark and Lana delve ever deep into the unknown as the show ups the action and style to cook up a comic-flavored confection of SciFi Noir.