A love story... With strings attached! 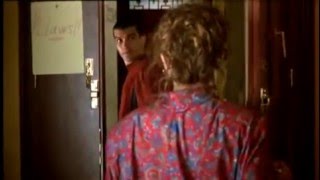 Antonio Banderas caught the world's attention with his portrayal of Ricky, an orphaned mental patient who stalks and kidnaps Marina (Victoria Abril), a porn actress and junkie, in order to make her love him in this decided departure for iconoclastic Spanish filmmaker Pedro Almodóvar. Suspense, tension, and uneasy humor mingle as Marina grapples with her addictive nature, a very bad toothache, and her own confusion about the need to be loved and the need for freedom. Meanwhile, Máximo (Francisco Rabal), an aging director who has just shot Marina's latest film, finds himself obsessed with her, while sister Lola (Loles León) worries Marina might be back on drugs and starts trying to track her down. The tension mounts as her sister closes in, and Marina becomes torn by her desire to escape and her growing affection for her captor. Almodóvar followed up his hit WOMEN ON THE VERGE OF A NERVOUS BREAKDOWN with this controversial, steamy thriller that contains nudity and some very passionate sex. The cast includes Almodóvar regulars Rossy de Palma, Julieta Serrano, and María Barranco and features a tense musical score by Ennio Morricone.

All About My Mother
$18.30 Super Savings
Add to Cart

Women on the Verge of a Nervous Breakdown (Blu-ray)
$34.90 Super Savings
Add to Cart

All About My Mother
$26.10 Super Savings
Add to Cart