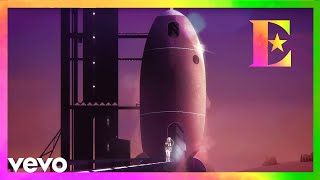 Audio Remasterer: Bob Ludwig.
Illustrator: Richard Kilroy.
Arriving ten years after the single-disc Rocket Man: The Definitive Hits (known as Rocket Man: Number Ones in North America) and 15 years after the double-disc Greatest Hits 1970-2002, Diamonds ups the game by offering two variations on Elton John's greatest hits: a double-CD version and a limited-edition triple-disc box set. Given John's canon is close to set, it should come as no surprise that Diamonds follows the same path as its predecessors -- indeed, the first ten songs on Diamonds are the same as those on Greatest Hits 1970-2002, with minor rejiggering; ultimately, there is a 26-song overlap -- but within its standard two-disc set, it finds a place for some important hits absent in prior comps. Notably, this has "Little Jeannie," "I Don't Wanna Go on with You Like That," and his live duet with George Michael, "Don't Let the Sun Go Down on Me," all welcome additions, and as it extends into the present, it also finds space for John's artistic renaissance of the 21st century in the form of "Electricity," "Home Again," and "Looking Up." The third disc on the deluxe version deepens the story further by adding a bunch of hits that could've feasibly been included on the first two discs -- "Lucy in the Sky with Diamonds," "Pinball Wizard," "Mama Can't Buy You Love," "Part-Time Love," "Victim of Love," "Empty Garden (Hey Hey Johnny)," "Kiss the Bride," the superstar charity single "That's What Friends Are For" -- and also underscores his enduring stardom and cultural reach by including OK '90s U.K. hits with Kiki Dee, Pavarotti, and LeAnn Rimes, plus his 2012 U.S. dance hit with Pnau, "Good Morning to the Night" (conspicuous in their absence is any duet with Leon Russell). This last disc offers up plenty of hits but it also feels slightly messy because of the leap from "Kiss the Bride" to "Live Like Horses," but that only indicates how John would've been equally well served by a four-disc set. Instead, we get this excellent -- if incomplete -- collection that is equally satisfying in either its double-disc or triple-disc incarnation. ~ Stephen Thomas Erlewine