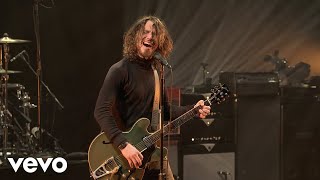 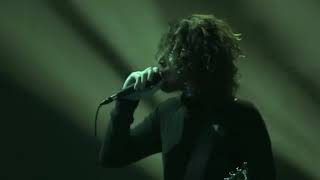 Pitchfork (Website) - "[A] career retrospective given right when the group seemed resurgent."
Clash (Magazine) - "LIVE FROM THE ARTISTS DEN stands as a unique snapshot, one of alternative music's biggest names looking both back and forward with a smile."

The first posthumous release from Soundgarden is Live from the Artist's Den, a hefty set documenting a hefty concert originally aired on PBS' long-running series during its sixth season in 2013. At the time Soundgarden gave their Artist's Den concert at the Wiltern in Los Angeles, they were three years deep into their reunion and in the midst of promoting their 2012 comeback album King Animal. All this means is that the stars aligned for Soundgarden to give a concert where they dug deep into their catalog -- a two-and-a-half-hour show, presented in full as a double-CD, quadruple-LP, and single Blu-ray, depending on what format you like. The set list doesn't skimp on the hits, but they're strategically placed, surrounded by deep cuts (the group digs out "Blind Dogs," a song they contributed to the soundtrack of The Basketball Diaries in 1995) and material from King Animal. All the unexpected song selections help give the album a slight edge that contrasts with the exceptionally polished presentation. The band wears its middle age well, sounding focused and more exacting than they did in the '90s, yet still undeniably vigorous. That Soundgarden sustains that energy throughout a marathon is a testament to their strength as musicians, and that Live from the Artist's Den maintains its interest throughout its two and a half hours is a testament to the depth of their catalog. ~ Stephen Thomas Erlewine

29%off
Soundgarden
Badmotorfinger
$9.98 on Sale
Add to Cart

Hot
Soundgarden
Louder Than Love
$9.98 on Sale
Add to Cart

27%off
Soundgarden
Live At The Palladium Hollywood (Blue Vinyl)
$19.80
Add to Cart

Hot
Soundgarden
Telephantasm: A Retrospective
$11.98 on Sale
Add to Cart
(50+)

House of Large Sizes
One Big Cake
$10
Add to Cart