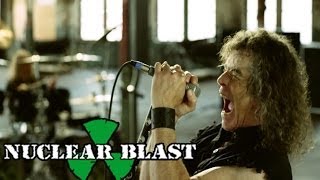 Audio Mixer: Greg Reely.
Recording information: Gear Recording Studio, Shrewsbury, NJ; Jrod Productions; SKH Studios.
Editor: Dan Korneff.
Photographers: Hakon Grav; Nico Ramos.
Continuing the artistic renaissance the band started with 2010's Ironbound, Overkill deliver their 17th album, White Devil Armory, a monument to classic thrash that makes it clear the band's recent form is far from a fluke. Their third studio outing in four years, the album finds the band once again going from strength to strength, pursuing their muse with a relentless vigor that imbues their sound with a refreshing directness. Where other bands might get tripped up trying to set the listener up for some kind of heavy metal revelation, Overkill keep things to the point with a seemingly endless barrage of killer riffs delivered with pace and power. This idea is embodied by songs like "Down to the Bone," which explodes out of the gate with crunching guitars and impossibly fast guitars before settling into a classic thrash groove that feels plucked from the genre's heyday. Searing tracks like this highlight the difference between the current wave of classic metal revivalist and the genuine article. Try as they might, bands like Lost Society (who are exceptionally talented in their own right) just can't capture the sense of refinement that Overkill bring to their music. It's an unexpected thing for a band to make it as long as Overkill have, and even rarer is the band that spends their third decade together putting out their best material (and after their iconic frontman had a stroke, no less), but if White Devil Armory is any indication, Overkill don't intend to slow down now that they're at the height of their songwriting power. ~ Gregory Heaney