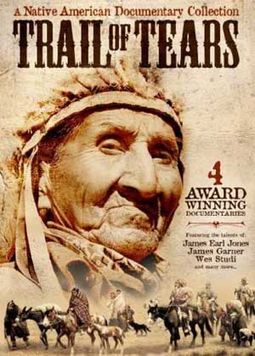 Native Americans have experienced a history full of oppression and racism. Since the period when Native tribes were found on this continent at the time of its 'discovery', the British and American governments disregarded Native Americans as the owners of the territory they occupied and used aggressive force to take their lands and destroy their people. This harrowing and compelling compilation of four award-winning documentary programs chronicles the struggles of the Native American culture from the forced relocation known as the Trail of Tears to the current issues faced by America's aboriginal people.

Throughout history, few minorities have fallen prey to as much abuse, disenfranchisement, manipulation and savagery as Native Americans. Violently driven out of their indigenous lands by invasive American and British governments that disregarded their claims as rightful territorial owners, the tribes suffered further indignity by getting relegated to footnotes in American history books. This compilation of four disparate but thematically-linked documentaries from the Mill Creek label works toward preserving the Native American legacy. As narrated by James Earl Jones (with additional vocal work by James Garner and Crystal Gayle), the first film - 2006's TRAIL OF TEARS: CHEROKEE LEGACY - travels back to 1830, when President Andrew Jackson set forth the controversial Indian Removal Act that drove the Cherokee people from their homelands. The second film, 1997's NATIVE AMERICAN HEALING IN THE 21ST CENTURY, offers a sweeping look at the groundbreaking healing methods employed by Native Americans, and traces their contributions to modern medicine. The third documentary, 2000's BLACK INDIANS: AN AMERICAN STORY, again features narration by James Earl Jones, in its tale of an unusual and oft-overlooked ethnic subculture in the U.S. that blends Native American and African American heritages. Finally, the 2008 OUR SPIRITS DON'T SPEAK ENGLISH: INDIAN BOARDING SCHOOL delves into the uniquely Native American perspective on boarding schools, and relays the sad tale of how many tribal children were snatched out of their homes by the U.S. government and forcibly reeducated in the ways of Western society.

67%off
By the People: The Election of Barack Obama (DVD)
$4.89 Super Savings
Add to Cart

We Steal Secrets: The Story of WikiLeaks (DVD)
$3.49 Super Savings
Add to Cart

Customer Rating:
Based on 32 ratings.


A very good presentation.We enjoyed the actors,History,scenery,and thought that went into this. Fred from Austin.

79%off
8 Film Collection: Characters of Courage (Freedomland / No...
$2.09 Super Savings
Add to Cart