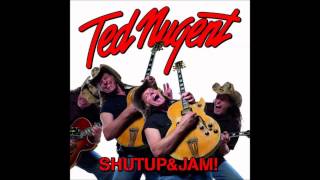 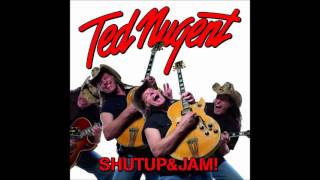 Personnel: Ted Nugent (vocals, guitar); Greg Smith (bass guitar); Michael Lutz, Andy Patalan (background vocals).
Audio Mixers: Michael Lutz; Andy Patalan.
Liner Note Author: Ted Nugent.
Recording information: LargeMouth Studios, China Spring, TX; Runnin' Bird Studio, Waco, TX.
Photographers: James Brown; Steve Galli; Marlyn Brown; Kristopher Helms.
The 17th solo studio long-player from the now Texas-based Motor City Madman, the Frontiers Records-issued Shut Up & Jam! is also the first outing from the inimitable Ted Nugent since 2007's Love Grenade. Not as politically heavy-handed as some of his late-2000 offerings, the 13-track collection is certainly no less red, white, and blue, offering up a slew of riff-heavy, blues/classic/Southern rock-minded guitar "jams" with appropriately Nuge-centric titles like "Trample the Weak Hurdle the Dead," "Screaming Eagles," "Semper Fi," "Do-Rags and a .45," and "I Love My BBQ," the latter of which sets its sights on the twin evils of "tossed salad" and "tofu" and delivers them back from whence they came with extreme prejudice. Elsewhere, the title track is as innocuous as its Dude/Bro moniker would imply, yet it's delivered with enough hooky grit, albeit of the confectionary variety, that it's hard not to get swept along by its unbridled enthusiasm. The muscular "Fear Itself," despite adopting a relatively dark tone early on, subverts Nugent's wildman reputation with the surprisingly Zen-like proclamation "Positive energy makes me smile," and the lengthy "Never Stop Believing," with its shifty architecture and nuanced picking shows that Uncle Ted can craft as well as he can shoot. Still, there's not a lot here that fans haven't heard before, and there are some obvious misfires like the rote, Texas boogie-blasted, Derek St. Holmes-led "Everything Matters," and the insipid "She's Gone," a duet with Sammy Hagar that epitomizes the worst in hammy, financially sound, white-guy blues rock, but Nugent, for better or for worse, is still in full command of his brand, and if he wants to Shut Up & Jam! he can. ~ James Christopher Monger

Ted Nugent
Free For All
$7 Super Savings
Add to Cart