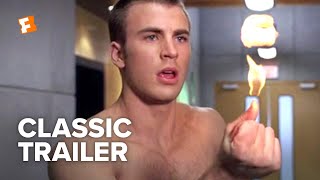 In this thrill-filled live-action Marvel Comics adaptation, director Tim Story (BARBERSHOP) balances comedy, romantic intrigue, special effects, high action, and even scientific trivia for a rounded FANTASTIC FOUR. Here, Mister Fantastic (Ioan Gruffudd), Invisible Woman (Jessica Alba), The Human Torch (Chris Evans), and The Thing (Michael Chiklis) come together on a space mission that goes wrong. The ship's owner (Julian McMahon)--who later transforms into evil Doctor Doom--refuses to abort the mission during a solar storm, which electrifies the ship and its entire crew, causing radical changes to their DNA. Back on earth, the transformed "heroes" adjust to their new powers, which are specific to their personalities. Mister Fantastic, who lacks assertion, has stretchy limbs of rubber. Invisible Woman, who loves Fantastic but thinks he can't see her for who she really is, does a disappearing act. The Human Torch, an immature guy who is brimming with energy, can burst into flames. And finally, The Thing, a great friend who is as solid as a rock, actually turns into one--and loses his wife due to his weighty disposition. Holing up in Fantastic's scientific lab where they run experiments on themselves in hopes of changing back to normal, the crew learns that Doctor Doom--who is so power hungry that he turns into metal and is able to conduct electrical currents--poses a serious threat. The heroes quickly master their abilities and channel their scientific smarts for one truly fantastic five-way face-off.

Visually, action sequences give way to tranquil interludes such as the New York City skyline with the Fantastics' lab glowing atop a skyscraper, while plot-wise, the interplay between the characters brings a human element to the film, with some touching moments from The Thing. At the end, a door is left open for what could be a super sequel.