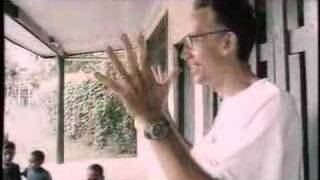 The career of John Pierson has taken him from a job at a New York independent movie theater (the Film Forum) to kick-starting the careers of Spike Lee and Michael Moore (Pierson helped fund SHE'S GOTTA HAVE IT and ROGER & ME) to writing his own book on the independent film boom (called SPIKE, MIKE, SLACKERS & DYKES) to helming his own TV show (IFC's SPLIT SCREEN). Despite these successes, his constant desire for new and exciting experiences led him to Fiji in 2003, where he decided to buy a movie theater, named the 180 Meridian Cinema, in the remote region of Taveuni. Once the purchase was secure, Pierson brought his family--wife Janet, teenage son Wyatt, and 16-year-old daughter Georgia--to the island to live for a year, with the aim being to open up the doors of the Meridian and let the islanders enjoy some cinematic delights, all free of charge.

Director Steve James (HOOP DREAMS) joined the family for their last month on the island, and REEL PARADISE documents their lives over this period. Pierson is depicted as an exuberant cineaste who loves to introduce the locals to mostly mainstream American fare such as JACKASS and X-MEN 2. But he also has to struggle with frequent bouts of burglary at the family's house on the island, failed attempts at integration with the local population, islanders who doubt his motives, and familiar problems that beset anyone attempting to raise two kids. But James's film ultimately paints a portrait of a man determined to spread his infectious enthusiasm for cinema to a remote outpost of the world, while expecting nothing in return except a few smiling faces and some sold out shows at his beloved Meridian.