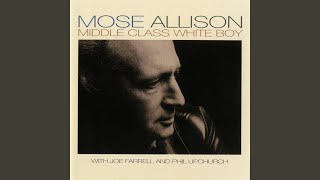 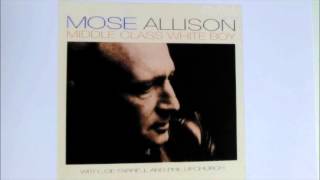 Middle Class White Boy perfectly demonstrates the unique mixture of pop and country-blues that made Mose Allison famous. Originally released by Elektra in 1982, this album features both original tracks by Allison, as well as covers of some jazz standards, such as Duke Ellington's "I'm Just A Lucky So-And-So." Allison is backed up by such greats as Joe Fareel on tenor sax and flute, and Phil Upchurch on guitar.

Personnel: Mose Allison (vocals, piano); Lou Donaldson (alto saxophone); Eric Gale (guitar); Jack Bruce (bass); Billy Cobham (drums).
Recorded live at the Montreux Jazz Festival, Montreux, Switzerland, in 1982. Includes liner notes by Mose Allison.
Though Allison was joined in this 1982 Montreux Jazz Festival performance by jazz-rockers Jack Bruce and Billy Cobham, this is certainly no fusion outing. Bruce and Cobham are known for their extrovert musical styles, but they remain properly respectful of the Allison tradition, which brooks no rock & roll and abhors a backbeat. The energy of the rhythm section and the excitement of the festival crowd add a sense of urgency to the proceedings.
The tracks cover Allison's long career, hitting such milestones as "Your Mind is on Vacation" and his moody deconstruction of "You are My Sunshine," as well as lesser-known tunes from his latter-day songbook such as "Middle Class White Boy" and "Night Club". This high-energy recording stands toe to toe with any other live Allison album available.