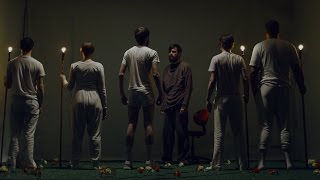 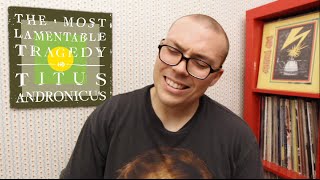 Rolling Stone
"New Jersey rock & roll believers Titus Andronicus get top mileage from a simple idea: baiting hardcore thrust with classic-rock hooks."
Spin
"It's comprised of the punchiest, most direct songs this band has yet unleashed."
Spin
"[W]hat THE MOST LAMENTABLE TRAGEDY might really represent for Titus Andronicus is the fruition of frontman Patrick Stickles' infatuation with the grand drama of hip-hop."
Alternative Press
4 stars out of 5 -- "As this brilliant and daring album moves forward, Stickles reopens old psychic wounds, striving to turn his intensely personal struggle into something triumphant and universal."
NME (Magazine)
"It harks back to the traumatic, psychological fantasy narratives of Genesis and Pink Floyd, and the pace runs from pub rock to hardcore..."
Paste (magazine) - "There are H?sker D? hardcore punk blasts, Thin Lizzy dueling guitars, Elvis Costello wordplays-and-whimsies, Bruce Springsteen hopeful grandiosities -- and Titus Andronicus is capable of making all of them sound like they came up with all this stuff first."
Pitchfork (Website) - "They turn a great, burning eye upon the world and spare no one from their observations, not even themselves."

Audio Mixer: Kevin McMahon.
Recording information: Excello Recording, Brooklyn, NY (09/01/2014-02/16/2015); Excello Recording, New Paltz, NY (09/01/2014-02/16/2015); Marcata Recording, New Paltz, NY (09/01/2014-02/16/2015); Marcata Recording, New Paltz,NY (09/01/2014-02/16/2015); The Bakery, Brooklyn, NY (09/01/2014-02/16/2015); The Soul Shop, Medford, MA (09/01/2014-02/16/2015).
Director: Patrick Stickles.
Arranger: Titus Andronicus.
On their first three albums, Titus Andronicus made it clear they were among the most thematically and stylistically ambitious bands to emerge from the punkier end of indie rock since the dawn of the new millennium. Having shown they were equal to the task of a concept album on 2010's The Monitor, TA leader Patrick Stickles has chosen to scale the slippery slope of a creative challenge that has bested many great bands: the rock opera. 2015's The Most Lamentable Tragedy is a narrative in five acts concerning a man scarred by abuse, drugs, and mental illness who encounters his doppelganger, leading to an internal crisis that explodes into violence. In the grand tradition of rock operas from the Who's Tommy to Fucked Up's David Comes to Life, The Most Lamentable Tragedy doesn't always scan very clearly as a story, with the through line from song to song often getting lost or wandering astray. But Stickles has done an outstanding job in drafting his protagonist, making his anger, fear, and madness seem vivid and powerfully honest, and Stickles' vocals bring the haunted man to vivid life. And if the narrative isn't always effective, Stickles has given each of the five acts a genuine feel of its own, from the agony and paranoia of Act I: Set Aside, or Miserable and Water Buried to the romantic hope-against-hope in Act IV, The Other Side, Or a Midsummer Night's Dream. The whole of this album is truly more than the sum of the parts, and the parts are quite strong in and of themselves; the opening salvos are smart but muscular punk rock with a melodic edge, "Mr. E. Mann" is one of several letter-perfect Bruce Springsteen homages on the set list, "Fatal Flaw" and "Come On, Siobhan" are superb pop tunes with just the right touch of grit, and the stark background of "No Future, Pt V: In Endless Dreaming" and "Stable Boy" help bring the album to an emotionally powerful close. And instrumentally, Stickles and his collaborators -- including guitarists Adam Reich and Jonah Maurer, bassist Julian Veronesi, drummer Eric Harm, and a small army of backing vocalists and instrumentalists -- give this music and their performances a rich and dynamic sound that suits the many moods of the material and achieves the stylistic diversity these songs demand. Sometimes suggesting a cross between H?sker D?'s Zen Arcade and Bruce Springsteen's The River, The Most Lamentable Tragedy is as big, smart, and heartfelt as either of those albums, and a striking example of what Titus Andronicus can achieve. Anyone who doubted they were one of the major bands of our day will doubtless be convinced after a couple spins of The Most Lamentable Tragedy. [The CD version added three bonus tracks.] ~ Mark Deming

The Mountain Goats
In League with Dragons
$13.60 CD Sale
Add to Cart

Superchunk
What a Time to Be Alive
$15.70 CD Sale
Add to Cart