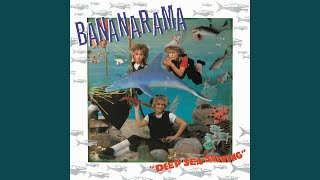 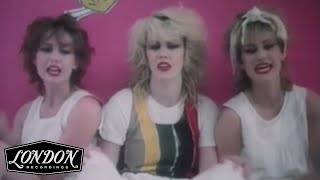 "...Bananarama's finest album by far, and an underappreciated pop gem of its era." (Stewart Mason, All Music Guide) Originally released in 1982, "Deep Sea Skiving" features Bananarama's debut single, "Aie A Mwana" (produced by Paul Cook of The Sex Pistols), and a slew of other great tunes including covers of the Marvelettes' "I Can't Help It," Paul Weller's "Doctor Love" and Steam's "Na Na Hey Hey (Kiss Him Goodbye)." This album spawned four charting hits for Bananarama in the U.K.

Bananarama: Sarah Elizabeth Dallin, Keren Woodward, Siobhan Fahey.
Recording information: 1982-1983.
Bananarama's first album is by far their best. Before they fell in with the lucrative but often boring Stock, Aitken & Waterman assembly line starting with 1986's True Confessions, Siobhan Fahey, Sarah Dallin, and Keren Woodward were unashamedly poppy, but they had enough artistic credibility to create a debut album that, barring a couple of small missteps, actually works as an album instead of a collection of singles with some filler. (They were even hip enough for their first single to be produced by ex-Sex Pistol Paul Cook.) Of course, the singles are terrific. There are four British chart hits in these 11 songs, and every one of them still sounds terrific, where later hits like "I Can't Help It" are terribly dated. The slinky "Shy Boy" and a rattling cover of the Marvelettes' "He Was Really Sayin' Somethin'" (co-starring the trio's early mentors Fun Boy Three) are classic girl group songs updated for the '80s, every bit as credible as any mid-level Spector or Motown singles. That Cook-produced debut single, "Aie a Mwana" (oddly left off the album's first U.S. edition), now sounds mostly like a curio of the brief tropical craze that hit the U.K. in 1981/1982, but "Cheers Then" is a heartbreaker, an absolutely lovely lost-love song that's possibly the best thing Bananarama ever did and certainly one of the top singles to come out of Great Britain in 1982. Surprisingly, though, Deep Sea Skiving has some album tracks that are the equal of the singles. A funky version of Paul Weller's "Doctor Love" (originally written for Weller's then-girlfriend Tracie Young, whose version came out in 1984) is a killer, as is the countrified "Young at Heart," written by the trio and Fahey's then-boyfriend, Robert Hodgens of the Bluebells (who did their own version on 1984's Sisters). Three more Dallin/Fahey/Woodward compositions present a well-rounded portrait of young girls on their own in the big city, with the bouncy, glammy "Hey Young London" like a night out on the town and the resentful "What a Shambles," a morning-after snit about an out-of-touch star from the point of view of three struggling working-class girls. It's the closing "Wish You Were Here," though, that caps the album's widely varied moods with a romantic wistfulness that's like the emotional flip side of "Cheers Then." Deep Sea Skiving is not perfect. "Boy Trouble" is awfully slight, and a cover of Steam's "Na Na Hey Hey Kiss Him Goodbye" is okay, but basically pointless. Still, it's Bananarama's finest album by far, and an underappreciated pop gem of its era. ~ Stewart Mason