Nikki Giovanni Like A Ripple On A Pond - A Golden Classics Edition, Volume 1 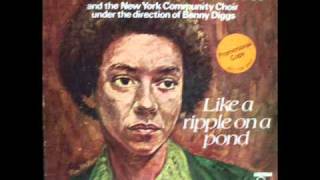 Like A Ripple On A Pond by Niki Giovanni & NY Community Choir.wmv (Music Video) 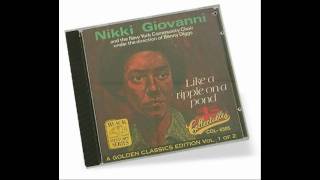 How i got over (Music Video)

In this remarkable, uplifting and invigorating collaboration, Nikki Giovanni recites her poetry while backed by the New York Community Choir under the direction of Benny Diggs.

Personnel includes: Nikki Gionvanni (spoken vocals); Benny Diggs.
The New York City Choir includes: Arthur Freeman, Wilber Johnson, Timothy Wright, Elizabeth Gamble, Edgar Kendricks.
Includes liner notes by Vernon Kitabu Turner.
Director: Benny Diggs.
Arrangers: Edwin Hawkins; Benny Diggs.
Nikki Giovanni's second album backed by the New York Community Choir, Like a Ripple on a Pond, didn't build on the success of the African-American poet's debut, but it did reach just outside the Top 50 on the black albums chart in 1973. It is just as strong as the debut, featuring Giovanni's voice up in front, while arranger and director Benny Diggs directs the powerful gospel choir behind her. The poet relates experiences both personal and of her people, but she's at her best when she speaks in the first person and describes the struggles she has gone through in a plainspoken yet warm manner -- those struggles aren't far off from the struggles many others have gone through. Giovanni's ability to relate to her audience, combined with the sections where the choir is allowed to let loose, makes this album a timeless one. ~ Andy Kellman

62%off
Nikki Giovanni
In Philadelphia
$4.98 on Sale
Add to Cart