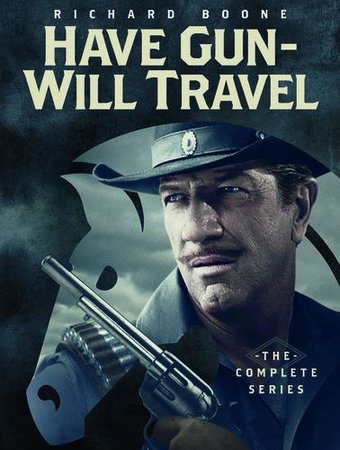 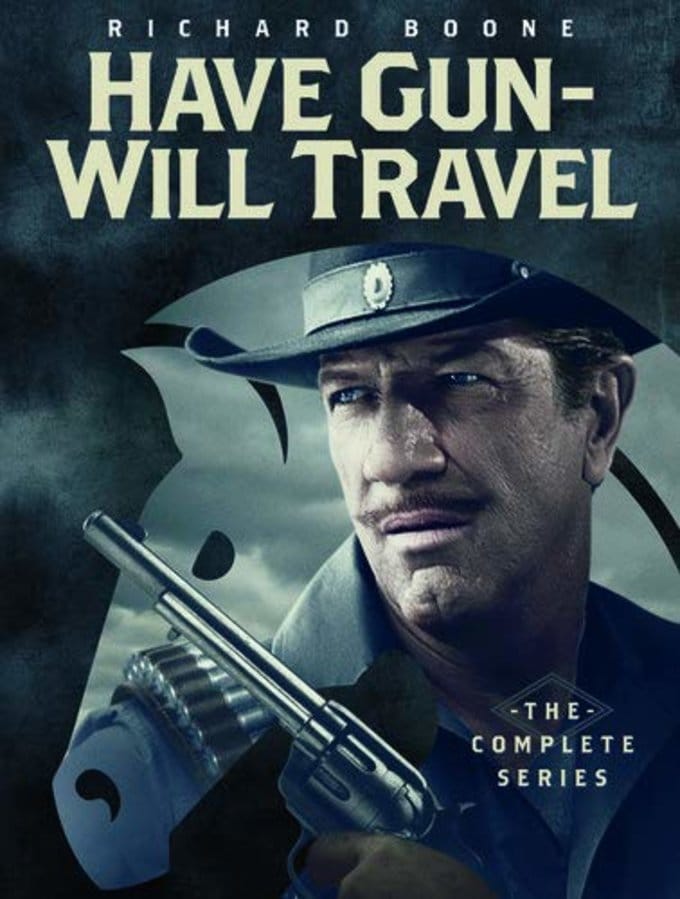 One of the best and most fondly remembered of the classic black-and-white adult Westerns, HAVE GUN, WILL TRAVEL starred Richard Boone as a gunslinger for hire who traveled under the name of Paladin. Headquartered at the Hotel Carlton in San Francisco, the college-educated Paladin spent his leisure hours pursuing the finer things in life: gourmet food, vintage wines, classical music, the best literature...and, of course, the most beautiful women on the West Coast. But whenever his professional services were called upon by a potential client, Paladin would slap on leather and issue forth his famous business card: "Have Gun, Will Travel. Wire Paladin, San Francisco" (the card was, of course, embossed with the image of a chess knight, or paladin). On the job, Paladin ritualistically dressed in black, his pearl-handled revolvers ever at the ready. Though he tended to operate outside and sometimes above the law, Paladin was scrupulously honest, adhering to a rigid code of honor. This, however, did not prevent him from verbally assaulting clients who had lied to or misled him -- which happened more than once in the course of his perambulations throughout the West. Once the job was done (usually by filling the villain of the week full of holes), Paladin bade farewell to those he had helped and rode back to San Francisco alone...always alone. If he felt particularly poetic, Paladin would mutter a few words of Shakespeare, appropriate to the occasion. Although Richard Boone was the only regular who appeared on each episode, Kam Tong was frequently seen as Hey Boy, the Hotel Carlton's best bellhop and Paladin's unofficial general factotum. Some episodes featured Lisa Lu as Hey Boy's female counterpart, a maid who answered to Hey Girl. Many of the series' episodes were written by such top-rank talent as Irving Wallace and Gene Roddenberry, while among the directors were Lewis Milestone, Andrew V. McLaglen, Buzz Kulik, and Richard Boone himself. Produced by Sam Rolfe, HAVE GUN, WILL TRAVEL ran on CBS for six top-rated seasons: from September 14, 1957, through September 21, 1963. The series' famous opening theme music was composed by Bernard Herrmann, while its closing theme, "The Ballad of Paladin"," was written by Richard Boone, Sam Rolfe, and Johnny Western, the latter doubling as singer.