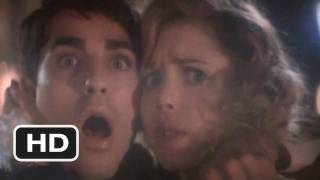 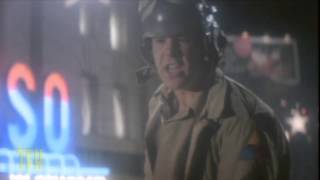 "Madness. It's the only way to describe it: madness. This isn't the state of California. This is the state of insanity. G2 should pour knockout drops into the water..."
- General Stilwell (Robert Stack), reacting to the panic in Los Angeles over the threat of a Japanese invasion right after the bombing of Pearl Harbor
"We've got to find a way to make these things smaller."
- Japanese sailor, trying to get a large radio into his submarine

Steven Spielberg's 1941 is a big-budget zany comedy detailing the hilarious panic that gripped Los Angeles after the Japanese attack on Pearl Harbor. Army General Joseph Stilwell (Robert Stack) is in charge of protecting the Californian coastline in the weeks following Pearl Harbor. Dan Aykroyd and John Candy are members of a tank crew responsible for setting up a cannon in Ned Beatty's backyard. As explosions burst forth and air-raid sirens scream, John Belushi, Tim Matheson, and Treat Williams are part of the army corp reacting to the news of war with a somewhat energetic craziness. They dance at the USO, compete with each other to get the prettiest girls, and watch as Hollywood Boulevard becomes a pile of ruins. The film features cameos by many Spielberg friends and associates, including directors Sam Fuller and John Landis and actors James Caan, Mickey Rourke, Penny Marshall, and Susan Backlinie, reprising her famous skinny-dip from the first scene in JAWS. Michael McKean and David Lander, otherwise known as Lenny and Squiggy from LAVERNE AND SHIRLEY, play Willie and Joe--a hat's-off salute to Bill Maudlin's famous World War II cartoon characters. The film suffered from critical venom upon its initial release but has since become a cult fave.