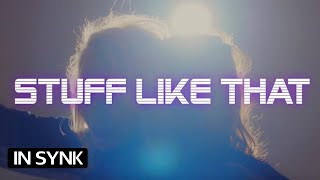 BANANARAMA - STUFF LIKE THAT (OFFICIAL MUSIC VIDEO) - from the album: IN STEREO

Personnel: Joe Holweger (guitar, drums); Ian Masterson (keyboards, programming).
Audio Mixers: Pete Hofmann; Richard X.
Working with producers Richard X and Ian Masterson, Bananarama achieve an interesting thing with In Stereo, their first full-length album in a decade. They manage to refresh a retro vibe, adhering to the Euro-dance sound that's been their specialty since the group became a duo, but not sounding precisely like a throwback. Credit goes to how Keren Woodward and Sarah Dallin retain an infatuation with classic girl group pop structure, a foundation that allows for a bunch of glitzy neo-disco and pseudo-house accoutrements. If Bananarama aren't precisely dealing with new trends in dance, there's also a certain dignity in how they're faithful to the sounds of the '80s, '90s, and Y2K: it doesn't feel like they're outdated as much as sticking to what they know looks good on them. ~ Stephen Thomas Erlewine