Get email alerts for Marty Paich
Currently Out of Stock: We'll get more as soon as possible
Notify Me When Available
Add to Wishlist
Format:  CD
item number:  ZCOP 00021
91% recommend us! 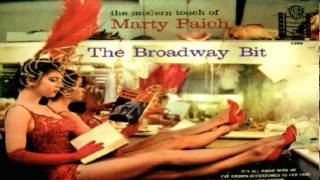 Digitally remastered two-fer from the Jazz great. During the 1950s, Paich was active in the West Coast as a jazz player and also worked intensively in the studios. THE BROADWAY BIT was taped in January 1959 (the exact recording date or dates are unknown), four years after Paich began recording under his own name. He not only played on, but arranged and produced numerous West Coast jazz recordings, including albums by Ray Brown, Ella Fitzgerald, Terry Gibbs, Stan Kenton, Shelly Manne, Dave Pell, Anita O'Day, Art Pepper (one of the main soloists on THE BROADWAY BIT), and Mel Torme, among others. Also includes the bonus album a JAZZ BAND BALL.