The man. The legend. The truth. 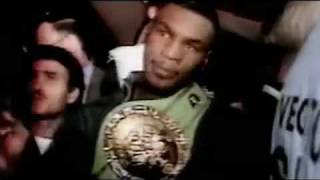 Love him or hate him, Mike Tyson is inarguably one of popular culture's most fascinating figures. In this riveting documentary portrait of the controversial boxer, filmmaker and friend James Toback lets Tyson tell his own volatile story. It all started in a rough-and-tumble Brooklyn neighborhood, where Tyson was picked on and beaten up as a youngster. But when he turned his fear into anger, he realized that his fists had the ferocity to frighten everyone around him. As a teenager, Tyson moved upstate to live with trainer Cus D'Amato, who became the devoted and compassionate father figure he never had. This support helped Tyson develop the strength and focus needed to become a devastating champion inside the ring. But when D'Amato died, something inside Tyson died too, turning him into an even more dangerous monster outside of the ring.

As Tyson speaks openly about the ups and downs in his tumultuous life--alternating between moments of sincere introspection and animalistic rage--Toback employs a split-screen approach to further emphasize his emotionally unstable nature. Mixed into this talking-head monologue is striking archival footage that shows Tyson in his prime, when he was one of the most feared and idolized athletes on the planet. TYSON is an appropriately subjective journey into the mind of a massively complicated man.

Mike Tyson reveals insights into his life in this no-holds-barred look at one of the most controversial and misunderstood boxers to ever step inside the ring.

When We Were Kings
$26.10 Super Savings
Add to Cart

We Steal Secrets: The Story of WikiLeaks (DVD)
$7.48 on Sale
Add to Cart