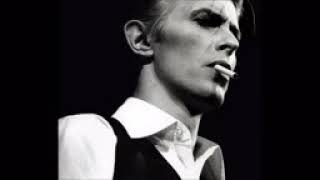 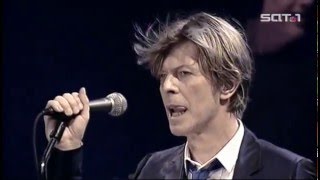 Personnel: David Bowie (vocals, guitar, koto, saxophone, keyboards, background vocals); Robert Fripp (guitar); Brian Eno (keyboards, synthesizer, midi controller); George Murray (electric bass); Dennis Davis (percussion); Antonia Maass, Tony Visconti (background vocals).
Audio Remasterers: Ray Staff; Tony Visconti.
Recording information: Hansa, The Wall, Berlin (07/11/1977-08/08/1977); Mountain Studios, Montreux (07/11/1977-08/08/1977).
The Germanic feel of this album is not surprising, as David Bowie recorded it in Berlin during his period of infatuation with the city. HEROES is a much more lively affair than LOW and has the benefit of a title track that remains one of Bowie's finest songs, in addition to excellent contributions from Robert Fripp and Brian Eno.
The thick, mysterious textures of "Beauty and the Beast" set the tone for the rest of the album. The Eno-influenced "Sense of Doubt" is the flip side to the majestic "Heroes"--dark and moody, as is "Neukoln". But, despite (or perhaps because of) the charged atmosphere of doom and gloom, this is a seminal Bowie album.