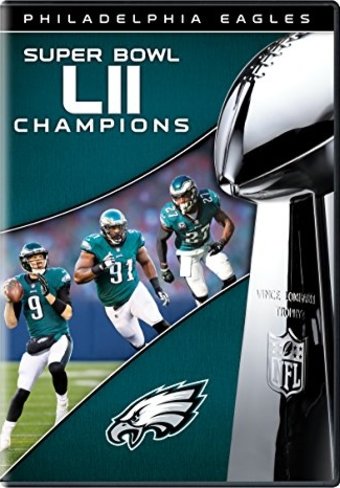 For the first time in franchise history the Philadelphia Eagles are Super Bowl Champions. And all the great moments are now yours to own in this dazzling Blu-ray combo pack from spectacular moments like the game-winning kick against the New York Giants, to all the nutty touchdown celebrations, through the rise of Nick Foles and ending with the Super Bowl rematch 13 years in the making.

The unforgettable 41-33 victory over the New England Patriots in Super Bowl LII is just part of the story of the Eagles remarkable season. NFL Films takes you on a journey through each game, from the opening kick off in Washington, through a 13-win regular season, leading up to the crowning glory at U.S. Bank Stadium.

With sideline sound and in-game wires that put you right in the action, award winning cinematography, pulse-pounding music, and exciting special features Super Bowl LII Champions: Philadelphia Eagles is a page of history for the bird gang and underdogs everywhere, and a long-awaited must-have for every Eagles fan!