A condemned murderer is rescued from the hangman by a corrupt railroad magnate who hires him to kill a rancher. 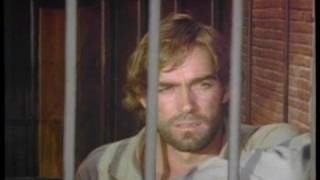 Professional killer Clayton Drumm is given a reprieve from the hangman's noose when he agrees to hunt down and assassinate rancher Matthew Sebanek. A railroad syndicate wants Sebanek murdered for the crime of refusing to sell his land. Clayton convinces Sebanek to let him stay on and work at the ranch, but instead of shooting his host, he develops a liking for him. When the rancher's sexy young wife, Catherine, seduces Clayton, the lovers flee. Sebanek rounds up a gang of trigger-happy gunmen, who are hell-bent on bringing back the adulterous fugitives, dead or alive.

Cult director Monte Hellman began his career with Beast From Haunted Cave (1959) which was produced by his mentor Roger Corman. He directed a pair of existential westerns starring Jack Nicholson, Ride in the Whirlwind and The Shooting in 1965. Two-Lane Blacktop (1971) is generally considered his best film. In China 9, Liberty 37, Hellman gives one of his heroes, Sam Peckinpah, a bit part as sleazy pulp-western writer Wilbur Olsen.

CHINA 9, LIBERTY 37 falls halfway between the Hollywood backlot-western school and the Italian "spaghetti" western genre, borrowing the best elements from both. Fabio Testi plays a gunfighter who is saved at the last moment from a hangman's noose. His liberators are a cartel of railroad men who want Testi to kill farmer (and former hired gun) Warren Oates, who has refused all entreaties to sell his land. As part of the scheme, Testi befriends Oates; on his own volition, he sleeps with Oates' wife Jenny Agutter. When the railroad barons insist that Testi go through with his mission, he refuses, and helps the farmer fight off the train moguls' hired thugs. Also known as GUNFIRE, CHINA 9 LIBERTY 37 features a cameo by director Monte Hellman's role model, Sam Peckinpah, who plays a creepy Ned Buntline-style novelist. And the significance of the title' It's the location of Warren Oates' spread: Nine miles from the town of China, 37 miles from the town of Liberty.

Death | Spaghetti Western | Assassination | Cowboys | Outlaws | Hit Men | Brothers | Assassins | Railroads | Railway Travel | Couples
This product is made-on-demand by the manufacturer using DVD-R recordable media. Almost all DVD players can play DVD-Rs (except for some older models made before 2000) - please consult your owner's manual for formats compatible with your player. These DVD-Rs may not play on all computers or DVD player/recorders. To address this, the manufacturer recommends viewing this product on a DVD player that does not have recording capability.