It's the oldest con in the book. 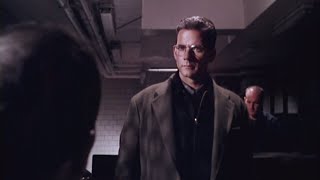 Moody, austere, and unabashedly clever, THE SPANISH PRISONER is familiar ground for puzzle-loving writer-director David Mamet. Campbell Scott plays the Hitchcockian hero Joe Ross, an unassuming fall guy who has invented a mysterious process worth an unnamed, but presumably enormous, figure. Joe's share in the reward is uncertain, however, and his growing nervousness is subtly stoked by Jimmy Dell (Steve Martin), a charming and apparently wealthy new friend. Suddenly Joe finds himself wondering who he can trust: his boss, his friends, Jimmy, the FBI, or even the girl at work who has a crush on him (Rebecca Pidgeon, speaking her husband's lines as only she can). The big con is always fun to watch from the inside, but Mamet knows it's even more fun when the audience is on the outside, left to imagine the con as all-encompassing so that everyone and everything is suspect. The fine ensemble acting and terse, loaded dialogue add to the atmosphere of total suspense while the muted but rich production design produces a too-believable longing in Joe, whose tiniest greedy qualm is still enough to spell disaster.

Joe Ross (Campbell Scott) is the inventor of a secret process that will make the company he works for very rich. But Joe isn't sure he'll get a piece of the pie, and his dissatisfaction makes him the perfect prey for con artists and manipulators. Director David Mamet manages to pull off the big con--even though Joe and the audience both know it's coming--then packs in more twists than a Bavarian pretzel factory.