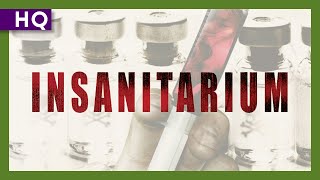 He's played a terrifyingly mono-syllabic kidnapper and murderer, an eccentric drug dealer, and Satan at least once each, so it was only a matter of time for the well-trained Peter Stormare (FARGO, BAD BOYS II, CONSTANTINE) to take on the role of Dr. Gianetti, the unhinged head physician of the Mid-Psych mental institution. When the punky Jack (Jesse Metcalfe) discovers the patients of Mid-Psych--including his sister--are being subjected to experimentation and turned into vicious killers, it's up to him and his nervous-yet-trusty friend and sidekick (Kevin Sussman) to take care of business. This innovative and energetic directorial debut from MIDNIGHT MEAT TRAIN scribe Jim Buhler combines gallows humor, a vivid cast of characters, lovingly crafted practical gore effects, and genuine terror to a sickening effect.