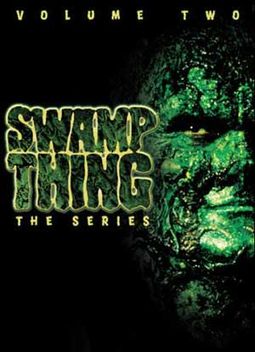 Based on a horror-fantasy comic book, SWAMP THING: THE SERIES tells the saga of a scientist-turned-monster who fights to protect humanity and the environment. This second volume of episodes features an exclusive interview with co-creator Berni Wrightson.

The First Half of the Epic Third Season Finally Comes to DVD!
When Dr. Alec Holland is left for dead, the victim of deadly sabotage, he is transformed by the swamp and the very chemicals meant to kill him into a creature now struggling with the balance between his own vengeance and protecting those who can't protect themselves.
The incredible adventures of the Swamp Thing continue with this 4-DVD set, containing the first 25 episodes of the series' 50-episode third season. Based on the legendary DC Comics character, the USA Network commissioned a total of 72 episodes of this cult favorite that aired between 1990–93. Starring Dick Durock (reprising his title role from the popular Swamp Thing feature films), Mark Lindsay Chapman, and Carrell Myers, Swamp Thing: The Series follows the tortured creature that was once a man on his quest to regain the humanity that was taken from him, purging the swamp of evildoers along the way.