Who says you're only young once? 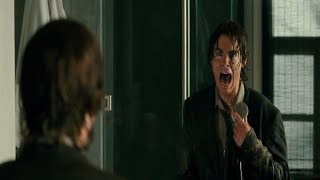 In the vein of FREAKY FRIDAY, PEGGY SUE GOT MARRIED, 13 GOING ON 30, and other "switch" comedies, 17 AGAIN answers the fantasies of disgruntled middle-aged parents everywhere, as high school basketball star turned average failure of a dad Mike O'Donnell (Matthew Perry) gets to begin again at age 17 (where--bonus!--he's played by Zac Efron). A strangely IT'S A WONDERFUL LIFE-style freak storm sends his body back through time to age 17, and since he's been living with his nerdy zillionaire buddy (Thomas Lennon) after being kicked out of the house by his wife, Scarlet (Leslie Mann), she and their kids (Michelle Trachtenberg and Sterling Knight) aren't privy to the change, enabling Mike to be covert father while posing as a high school student, and to tempt his wife into quasi-cougardom. The temptation never gets too far, thank heavens, for Efron belongs not to any one woman but to all the girls enraptured by his star turn in HIGH SCHOOL MUSICAL. He's the reason to see the film and he clearly has great fun playing someone much older and squarer than himself (the idea that he will eventually become Perry again is allowed to carry its own melancholy existential charge). Directed by Burr Steers (IGBY GOES DOWN), this is breezy fun for the whole crazy family, with a soundtrack that includes new and classic songs from the likes of Cat Power, Santogold, Kenny Loggins, and Young M.C.

If you somehow had the chance, would you do your life over' Thirtysomething Mike O'Donnell would. Then one mysteriously magical moment, Mike gets his chance. He's suddenly back at Hayden High where he's the star of the basketball team, a total hottie, and a classmate to his own teenage kids…which gives Mike a chance to go from not-so-good dad to really cool friend. Zac Efron (Hairspray, the High School Musical movies) and Matthew Perry (Friends) are 17 Again and fabulously funny as the younger and older Mike in a good-time time-warp comedy that proves the best year of your life is the one you're living right now.

Back to the Future
$12.50 Super Savings
Add to Cart