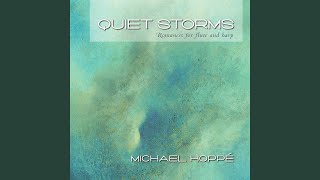 Composed by Michael Hoppe.
Personnel: Louise Di Tullio (flute); Lou Anne Neill (harp); Steve Roach (sound designer).
Personnel: Lou Anne Neill (harp); Louise De Tullio (flute).
Composer Michael Hoppe usually plays piano and keyboard on his recordings; on Quiet Storms: Romances for Flute and Harp, he turns the performing duties over to harpist Lou Anne Neill and flautist Louise Di Tullio. The flute and harp are relatively quiet, so you may be tempted to put the album on for background music. Don't be surprised if the music suddenly carries you away through buried emotions to distant thoughts. Hoppe knows how to craft a moving melody, and he takes you there in style. "Quiet Storms," "Andrew's Theme" (from Misunderstood), the somber "October Poem," "Waltz for Raphael," and "Nocturne" are romantic, yet gripping. There are lighter contrasts: "Sand Castles" has a carefree, windblown touch with a cadence exactly like patting down sand; "Petite Giselle" springs through meadows buoyantly; "Avalon" is mysterious, and "Pieces of the Moon" is dreamy. Soft environmental sounds (thunder, rain) frame the album on "Eyes of the Wind Theme." Here, the harp sounds like raindrops falling on a warm puddle or blowing in the breeze. A lovely album. (By the way, Hoppe added to the artistry of the album by contributing two stormy (visual) landscapes for the liner notes.) ~ Carol Wright

Yanni
Live at the Acropolis [Bonus Track]
$10
Add to Cart