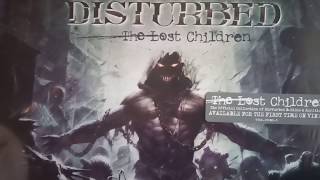 Personnel: David Draiman (vocals); Dan Donegan (guitar, electronics); John Moyer (bass guitar); Mike Wengren (drums).
Illustrator: Raymond Swanland.
Photographer: Travis Shinn.
The Lost Children, Disturbed's first collection of rarities and B-sides, arrived almost two years after Asylum, with which the veteran metal outfit decided to embark on an "indefinite hiatus." Boasting a pair of previously unreleased cuts ("Mine" and "3"), solid enough covers of Judas Priest's "Living After Midnight" and Faith No More's "Midlife Crisis," bonus cuts from extended releases, and a smattering of other high-octane goodies, The Lost Children comes off as surprisingly cohesive for such a grab bag of castoffs, with highlights coming from the searing electro-thrash opener "Hell," the dark and melodic "Sickened," the punishing "A Welcome Burden," and the arena-ready "Old Friend," any of which could have held their own amidst the roar of their brothers and sisters on the studio albums. ~ James Christopher Monger