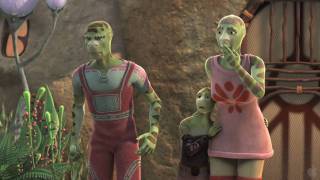 With its feature DELGO, Fathom Studios is looking to be the indie answer to Pixar. Blending a Tolkien-like mythos and an eastern philosophy with a heaping dose of wit, DELGO is a kid-friendly tale with a dash of sophistication that is a rare find among family fare. While Fathom's team is considerably smaller than mainstream animation houses, they went out of their way to pack DELGO with Hollywood talent. Leading the charge is Freddie Prinze Jr. as the title character, a rebellious young orphan. Living in the fantasy world of Jhamora, Delgo and fellow Lockni, including his best friend, Filo (Chris Kattan), and teacher Elder Marley (Michael Duncan Clarke), contend with the occupying Nhorins, ruled by King Zhan (Louis Gossett Jr.). When the delicate truce between the two groups is threatened by the return of King Zhan's exiled sister, Sedessa (Anne Bancroft), Delgo finds an unlikely ally in Nhorin general Bogardus (Val Kilmer) and a romance with King Zhan's daughter Kyla (Jennifer Love Hewitt).

DELGO proves both a feast for the eyes and a compelling story that balances drama and humor nicely. While DELGO may lack the resources of Pixar and Blue Sky, its message of unity is something that everyone can appreciate in times of divisiveness. With its star-studded cast and its uplifting story, DELGO is sure to find an audience in the young and old alike.

When a forgotten enemy returns, the fate of the world lies with a spirited princess and an unlikely hero. Take an exciting journey to a spectacular realm of magic, fantasy, romance, and adventure.

The Lord of the Rings: The Fellowship of the Ring (2-DVD)
$6 Super Savings
Add to Cart

The Lord of the Rings: The Fellowship of the Ring (Blu-ray...
$9.80 Super Savings
Add to Cart

The Lord of the Rings: The Fellowship of the Ring (Blu-ray)
$18.70 Super Savings
Add to Cart