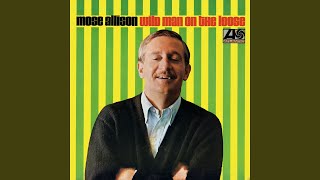 Originally released by Atlantic in 1966, "Wild Man" is one of Allison's strongest trio recordings (on it he's backed by Earl May on bass and Paul Motian on drums).

Personnel: Mose Allison (vocals, piano); Earl May (bass); Paul Motian (drums).
Originally released on Atlantic (1456). Includes liner notes by Mose Allison.
Personnel: Mose Allison (vocals, piano); Paul Motian (drums).
Liner Note Author: Leslie Tomkins.
Recording information: 1964-1965.
The lion's share of recordings by this artist are in a piano trio setting, and this mid-'60s session finds him working with one of the best combinations he ever had. Bassist Earl May is a solid, inventive player who is beautifully recorded here with a sound that can have the soulfulness of a classical guitar at times. On drums, Paul Motian is something of a legend, and here is heard at his most straight-ahead, simple and swinging with some nice touches from the brushes. He is also recorded extremely well, giving the pianist a really beautiful base to take off from, as well as making the overall tracks sound brilliant. The art of recording piano trios in this manner, with such a clear and immediate sound, seems to have been lost unfortunately. Sometimes a weak link on his records, even the Allison instrumentals come across forcefully. Is there a Cecil Taylor influence, or is it just the same Duke Ellington touches heard in Taylor's music? The instrumental track "Power House" is one of the finest numbers of this sort Allison has recorded. Vocal performances are smooth as always, although the set does not contain any totally classic numbers. ~ Eugene Chadbourne

24%off
Mose Allison
Transfiguration of Hiram Brown
$11.40
Add to Cart