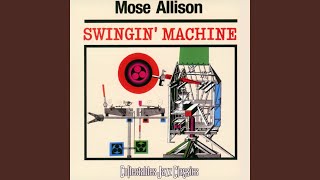 This Atlantic release is one of the rare instances where Allison recorded outside of the context of a piano trio. On it, he's joined by Jimmy Knepper on trombone, Jimmy Reider on tenor, Addison Farmer on bass and Frankie Dunlop on drums.

Personnel: Mose Allison (vocals, piano); Jimmy Reider (tenor saxophone); Jimmy Knepper (trombone); Addison Farmer (bass); Frankie Dunlop (drums).
Originally released on Atlantic (1398).
Personnel: Mose Allison (vocals, piano); Jimmy Reider (tenor saxophone); Jimmy Knepper (trombone); Frankie Dunlop (drums).
Liner Note Author: George Hoefer.
Recording information: 11/08/1962-11/09/1962.
Jazz fans may find this Mose Allison session unique among scads of releases from this laid-back, witty and original singer and pianist. Almost never found recording outside of the piano trio context, this album perhaps reveals the reason why: on a whole, adding horns to Allison's band just doesn't work that well. The trombonist Jimmy Knepper is of particular interest, in that he most often recorded under the intense leadership of Charles Mingus, a far cry from the loose and relaxed sound of Allison. His fellow hornman here is tenor saxophonist Jimmy Reider; not a very well-known jazzman but certainly competent in a swing style. If the leader had stuck to all vocal numbers this might have been a top drawer album. All the vocal tracks here are fine, with the song "Stop This World" rating among the best things this artist has recorded in a long career. It's the instrumental tracks that drag, however, since like any respectable pianist bandleader, Allison chooses to put the two horns out front for theme-solo-theme arrangements that would only be worth repeated listening if every other jazz performance ever recorded happened to vanish off the face of the earth. Allison's piano playing picked up some steam as the '60s wore on, so it is a shame he didn't revisit this concept at a later date. In all, an enjoyable album but a bit disappointing. ~ Eugene Chadbourne