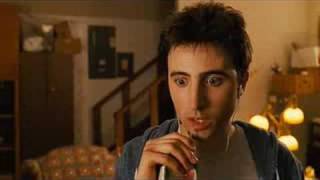 In the hallowed tradition of such coming-of-age comedies as PORKY'S and AMERICAN PIE, Sean Anders's SEX DRIVE is a genial and hilariously juvenile adventure about misguided intentions and true love. As the film opens, we meet the sensitive and lovelorn Ian Lafferty (Josh Zuckerman). Taunted by his testosterone-addled older brother, Rex (an excellent James Marsden), and shunned by his co-worker/dream girl, Ian takes solace in a raunchy Internet romance with a blonde beauty known as Ms. Tasty. With college approaching and his virginity still intact, Ian allows his friend--and least likely Lothario--Lance (Clarke Duke) to talk him into driving from Chicago to Knoxville. There, Ms. Tasty has promised Ian a wild ride of a more intimate nature. Complicating this lusty road trip is the boys' pilfering of Rex's beloved muscle car, as well as the presence of Ian's other best friend, Felicia (Amanda Crew). On the road to Knoxville the trio will encounter engine breakdowns, jilted backwater boyfriends, abstinent temptresses, and an Amish farmer (Seth Green) as handy with autos as he is quick with sarcasm. But as the action comes to a head in Knoxville, Ian and Felicia must confront the greatest hurdle yet: their feelings for each other. Will sex ruin the bonds of friendship' Will Lance change his carefree ways after an Amish assignation' And will Rex beat Ian to a bloody pulp once he catches up with Ian' Director Sean Anders fills SEX DRIVE with just the right mix of bawdy gags, sharp laughs and emotional honesty. The result is a randy romp that remains true to the lessons of its forefathers: love is never the trip you expect it to be.