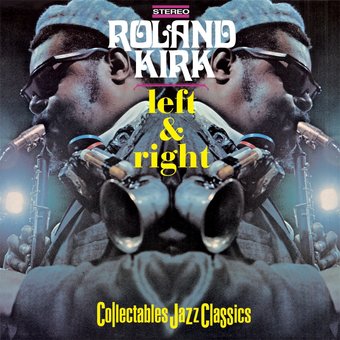 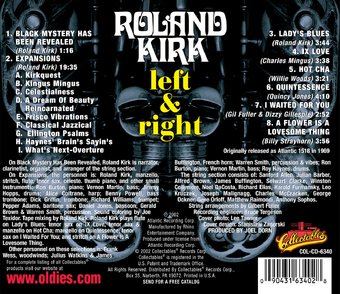 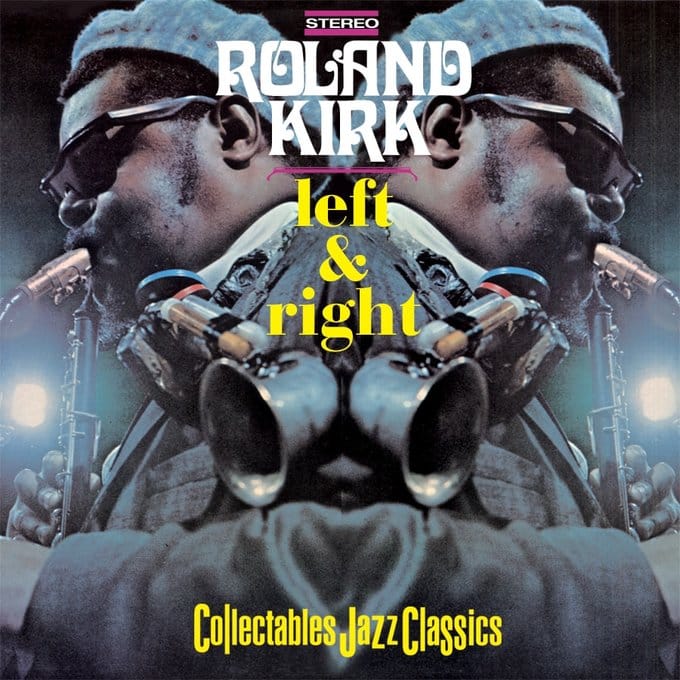 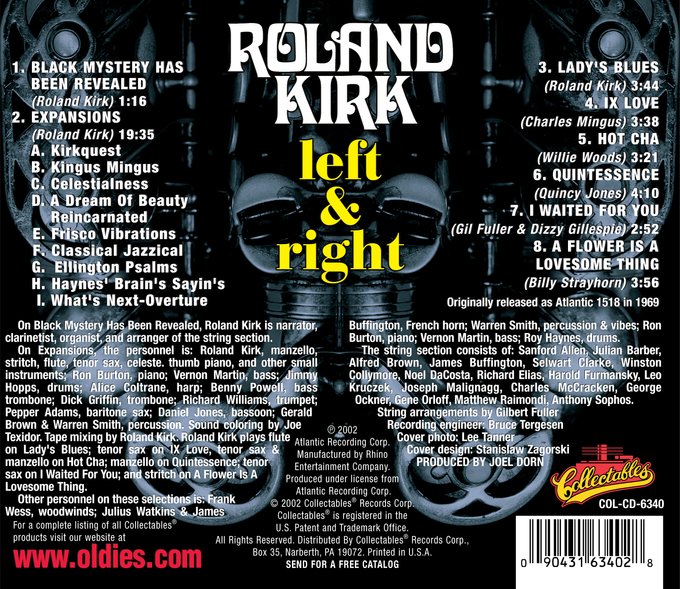 Personnel includes: Rahsaan Roland Kirk (spoken vocals, arranger, tenor saxophone, stritch, manzello, flute, clarinet, celeste, organ, thumb piano, various instruments); Gilbert Fuller (arranger); Pepper Adams (baritone saxophone); Richard Williams (trumpet); Julius Watkins, James Buffington (French horn); Dick Griffin (trombone); Benny Powell (bass trombone); Frank Wess (woodwinds); Daniel Jones (bassoon); Alice Coltrane (harp); Warren Smith (vibraphone, percussion); Ron Burton (piano); Vernon Martin (bass); Jimmy Hopps, Roy Haynes (drums).
Originally released on Atlantic (1518). Includes liner notes by Ira Gitler.
The title of this album, Left and Right, no doubt refers to the sides of Rahsaan Roland Kirk's brain, which were both heavily taxed in the composing, arranging, conducting, and playing of this recording. For starters, the band is huge -- 17 players plus a 16-piece string section, all of it arranged and conducted by Kirk, a blind man. None of this would matter a damn if this weren't such a badass platter. Along with Kirk's usual crew of Ron Burton, Julius Watkins, Dick Griffin, Jimmy Hopps, and Gerald Brown, there are luminaries in the crowd including Alice Coltrane on harp, Pepper Adams on baritone saxophone, and no less than Roy Haynes helping out on the skins. What it all means is this: The man who surprised and outraged everybody on the scene -- as well as blew most away -- was at it again here in "Expansions," his wildly ambitious and swinging post-Coltrane suite, which has "Black Mystery Has Been Revealed" as its prelude. While there are other tracks on this record, this suite is its centerpiece and masterpiece -- despite killer readings of Billy Strayhorn's "A Flower Is a Lovesome Thing" and "Quintessence." "Expansions" has Kirk putting his entire harmonic range on display, and all of the timbral extensions he used in his own playing are charted for a string section to articulate. There are subtleties, of course, which come off as merely tonal variations in extant harmony with the other instruments, but when they are juxtaposed against a portrayal of the entire history of jazz -- from Jelly Roll Morton to the present day -- then they become something else: the storytellers, the timbres, and the chromatic extensions that point in the right direction and get listeners to stop in the right places. This is an extreme for Rahsaan -- extremely brilliant and thoroughly accessible. ~ Thom Jurek