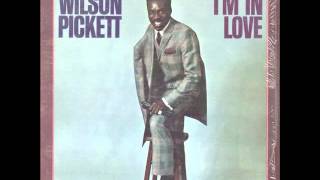 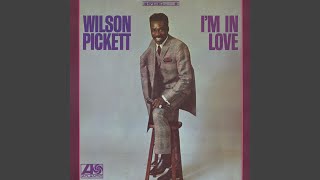 Originally released by Atlantic in 1968, "I'm In Love" features songwriting contributions by Bobby Womack and backing by Muscle Shoals session heavyweights. Highlights include "Jealous Love" and Sam Cooke's "Bring It On Home To Me." This album hit #9 on the Billboard Black Albums chart in 1968, and contains four charting singles.

Personnel: Wilson Pickett (vocals); Bobby Womack, Reggie Young (guitar); King Curtis (saxophone); Bobby Wood (piano); Tom Cogbill (bass); Gene Chrisman (drums).
Recorded at American Studio, Memphis, Tennessee in 1967. Originally released on Atlantic (8175).
Liner Note Author: Jon Landau.
Recording information: 1968.
Surely no one was expecting a "quiet storm" album from Wilson Pickett in 1968, and that sure isn't what they got with I'm in Love, but the Wicked Pickett sounds a lot more convincing on this album's romantic numbers than anyone would have had a right to expect from one of the baddest cats of Southern soul. Of course, there aren't all that many romantic ballads here, but Pickett's rough-and-ready soul shouting manages to sound just as convincing on "Bring It On Home to Me" and "That Kind of Love" as he does on the pained "Jealous Love" and a properly intense rip through "Stagger Lee." Pickett makes the most of the songwriting contributions from frequent collaborators Bobby Womack and Don Covay, while Tommy Cogbill and his crew of Muscle Shoals session heavyweights offer music which keeps up with Pickett for guts, soul, and drive -- no small statement, considering Pickett's richly deserved reputation as one of the strongest and most consistent artists of the period. Like most R&B albums of the period, I'm in Love sounds more like a set of tunes than a unified album, but it's a good set of tunes, performed with Pickett's usual high level of passion and skill, and if you're any kind of fan you'll revel in it. ~ Mark Deming