In Vogue: The Editor's Eye 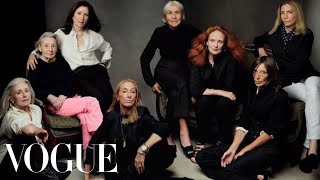 In Vogue: The Editor's Eye Trailer

HBO Documentary Films presents an exclusive profile of the world's most influential fashion magazine -- told through the eyes of several of its most iconic fashion editors. Drawing on Vogue's exceptional archives, the film explores Vogue's cultural impact since its launch in 1892, and features behind-the-scenes interviews with editors who have contributed to the magazine's legacy, including current editor-in-chief Anna Wintour and fashion editors Babs Simpson, Grace Coddington, Tonne Goodman, Phyllis Posnick, Jade Hobson, Carlyne Cerf, Polly Mellen, and Camilla Nickerson. In addition, Vogue subjects Nicole Kidman and Sarah Jessica Parker, industry icon Hamish Bowles, and designers Nicolas Ghesquiere and Marc Jacobs each recall their experience collaborating with the top photographers and image makers of the day.

17%off
Buffy the Vampire Slayer
$12.50 Super Savings
Add to Cart

68%off
Barbie: A Fashion Fairytale
$4.78 Winter Sale
Add to Cart

The Gospel According to André
$18.10 Super Savings
Add to Cart

The First Monday In May
$11.60 Super Savings
Add to Cart

81%off
Midnight Madness: The History of Horror, Sci-Fi and Fantasy...
$5.58 Winter Sale
Add to Cart