Greatest of all spectacles! 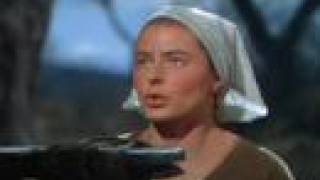 Ingrid Bergman gives a sincere and spellbinding performance as Joan of Arc, a 16th-century peasant who convinces the cynical French royalty that God has commanded her to drive the British out of France. Placed at the head of the French army, Joan leads the forces to one daring victory after another, but betrayal lies in wait. Based on Maxwell Anderson's 1946 play, JOAN OF LORRAINE, director Victor Fleming's (GONE WITH THE WIND, THE WIZARD OF OZ) final film is a masterful adventure and tragedy.

Victor Fleming proved his skill with massive crowd scenes in both GONE WITH THE WIND and THE WIZARD OF OZ, so the impeccable battle sequences in JOAN OF ARC come as no surprise. The real piece de resistance is Ingrid Bergman's stirring performance as the young Joan, who hears voices from nowhere instructing her to aid France in driving out the British. Joan travels to the court of the dauphin, Charles VII (José Ferrer), where she passes a tricky test to persuade the dauphin of her authenticity. Placed at the head of the French army, Joan's courage and brilliant military tactics lead to victory after victory, but soon the dauphin fears Joan's enormous popularity and sells her out. Captured by the British, Joan stands trial for heresy and is sentenced to death at the stake. Many years after her martyrdom, the Catholic church would make Joan a saint. Beautifully written and wonderfully performed, Victor Fleming's last film is a spiritual adventure.

M For Mississippi - A Road Trip Through The Birthplace Of...
$15.50 CD Sale
Add to Cart