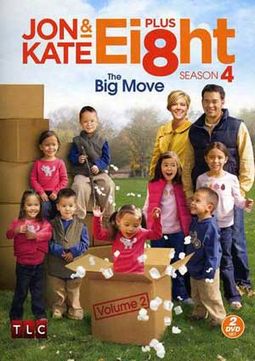 Currently Out of Stock: We'll get more as soon as possible
Notify Me When Available
Add to Wishlist
Format:  DVD  (2 Discs)
item number:  XEN 82054D
91% recommend us!

Jon and Kate had a pair of twins. Then they had sextuplets. Now they have the oh-so-enviable task of cleaning up more messes than is humanly possible, dealing with unruly--yet surprisingly charming--toddlers, and just trying to keep their cool as they juggle eight little lives. This TLC reality series benefits from its firm hand on cutesy control. The kids are cute but genuine, and the young parents express their affection--for their spawn as well as for each other--primarily through refreshingly sarcastic humor. Not without their rough patches, the Gosselins are one family that puts the "real" in "reality television." This collection includes the conclusion of the hilarious and heartwarming series' fourth season, in which the Gosselins prepare for an exciting move into a new house, take in mischievous puppies, and head to a basketball game to meet the Harlem Globetrotters.

In Volume 2 of the fourth season of Jon& Kate Plus Eight , fans follow the Gosselin clan as they finally move into a house large enough for everyone including some canine additions to the family! In one episode, eight-year-old twins Mady and Cara play Mommy for the Day. In another, they head to the orthodontist for the first time while their six siblings get their teeth cleaned. The family travels to New York on a press tour and then to Tennessee to volunteer at St. Jude's Hospital. They also find a way to fit in a trip to watch the Harlem Globetrotters in action! But the biggest focus in this Volume is the Gosselin's big move where we watch them say goodbye to the home where the kids have grown up and where fans first fell in love with this unique and fascinating family.