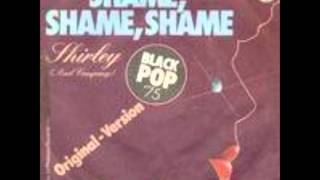 Shirley & Company hit the #1 on the R&B charts with "Shame, Shame, Shame" in 1975. This album is filled with 11 tracks of early Disco dynamite. This release is famous for it's politically satirical cover art.

Shirley & Company: Shirley Goodman, Jesus Alvarez (vocals).
Includes liner notes by Mark Marymont.
Liner Note Authors: Mark Marymount; Mark Marymont.
An eclectic mix of funk, disco, Caribbean, moody R&B, and pop influences, this hidden gem of an album followed the surprising comeback success that Shirley Goodman -- one-half of legendary 1950s duo Shirley & Lee -- enjoyed with the single of the same name. Penned and produced by Vibration founder Sylvia Robinson, "Shame, Shame, Shame" was one of the earliest examples of disco, following in the footsteps of efforts like George McCrae's "Rock Your Baby" and the Hues Corporation's "Rock the Boat," but with a notably soulful grip. The tune's nifty guitar strolls, spirited piano licks, and persistent percussion, combined with the utter enthusiasm of Goodman and male vocalist Jesus Alvarez, make for a hard-to-resist concoction. The album isn't limited to the fiery antics of that song; all of its selections share a common feel-good vibe. Perhaps the most celestial moment is the endearing, easily coaxing "I Gotta Get Next to You"; it's truly rare to find a ballad so simultaneously soulful and relaxed. Additionally, both "Love Is" and "I Guess Things Have to Change" are sprightly, mellow numbers with fluid horn arrangements and vocal lines that showcase Alvarez's impressive writing skills. Goodman co-wrote several tunes as well: the reggae-influenced "Jim Doc Kay" and the sassy "Keep on Rolling On." The two vocalists trade verses on a number of tunes, making for a unique, well-rounded sound. "Cry, Cry, Cry" and "Disco Shirley," two takeoffs on the initial hit, were released as follow-up singles that didn't fare so well. In 1976, Vibration also released a non-album single, "I Like to Dance," featuring Goodman paired with a new male vocalist (surprisingly, Collectables didn't include this on its CD reissue). Perhaps if one of the album's more divergent efforts had been chosen as a single instead, success wouldn't have been as fleeting. ~ Justin M. Kantor

54%off
Southside Movement
The Very Best of I've Been Watching You (Limited) (CD)
$5.98 on Sale
Add to Cart

This CD Has The COMPLETE "Shame,Shame,Shame" LP on It! (Incl. ALL The Instrumental Versions!!!)

Shirley Sounds a LOT Like "SYLVIA" Robinson on This LP/CD! (As SYLVIA Did "Work" on Some of The Songs!)