Love Me or Leave Me (Blu-ray)
Warner Archive Collection (series) 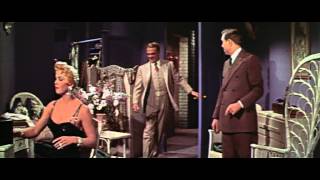 Love Me Or Leave Me - Trailer

Roaring '20s songstress Ruth Etting had everything - the looks, the wiles, the smoky jazz voice, the it. She also had Martin "The Gimp" Snyder, the Chicago racketeer who, even as he propelled her career, afflicted her.

Laced with Doris Day's vibrant performances of songs from the era, this 1955 Academy Award winner (Best Motion Picture Story) is a musical unlike any other, a tough-minded, fact-inspired tale of Etting's life with the man who boosted her career with strong-arm tactics and smothered her in an obsessive grip that Etting escaped at great peril. As the gangster Snyder, James Cagney earned one of the film's six Oscar nominations. And Day's Etting was a career-best dramatic performance, one that brought acclaim from critics and protest letters from fans unprepared for the departure from her traditionally sunny roles.

Tear Jerker | Love Story | Recommended | Theatrical Release | Jazz
This product is made-on-demand by the manufacturer using Blu-ray BD-R recordable media. Almost all Blu-ray players can play BD-Rs, but the player might record an update from the manufacturer.

Young at Heart
$19
Add to Cart