Get email alerts for The Infamous Stringdusters
Available: Usually ships in 2-5 business days
Only 4 copies left
Add to Cart
Add to Wishlist
Format:  CD
sku:  6SJEY
Our customers love us! 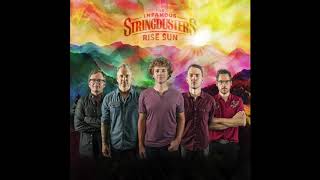 Personnel: Andy Falco (vocals, guitar, piano, Fender Rhodes piano, glockenspiel, percussion); Andy Hall (vocals, resonator guitar, harmonica); Chris Pandolfi (vocals, banjo, electric banjo); Jeremy Garrett (vocals, fiddle); Travis Book (vocals, upright bass, electric bass).
Audio Mixer: Billy Hume.
Photographer: Jim Mimna.
The highly anticipated follow-up to 2017's Grammy Award-winning Laws of Gravity, Rise Sun sees the progressive bluegrass quintet delivering another technically superb collection of songs that showcases their remarkable chops. Like its predecessor, the 13-track set pairs the inventive arrangements and virtuosic picking of fellow string wizards Punch Brothers with a more traditional singer/songwriter approach, resulting in something that at times hews closer to country-pop than bluegrass. That's not the case on the spirited opener and title track, which rolls in like a gospel train with a headful of righteous steam, or the high and lonesome "Long Time Coming," which adopts a similar tone but flirts with dissonance. The wistful "Planets" is where Rise Sun begins its pivot, administering a compelling blend of goosebump-inducing harmonies and emotive playing -- a little showy, but always in service of the song -- that feel more in line, architecturally, with rock and pop. "Last of the Lucky Ones" and "If You're Gonna Love Someone" follow suit, but with lesser degrees of success -- are both lovely but lyrically inert. All is forgiven with the arrival of the penultimate "Cloud Valley" -- a versatile instrumental showstopper -- and the heartfelt closer "Truth and Love," the latter of which finds the sweet spot between the group's myriad stylistic proclivities, and delivers the goods with equal parts musicianship and mirth. ~ James Christopher Monger

The Infamous Stringdusters
Fork in the Road
$12.70 CD Sale
Add to Cart

Greensky Bluegrass
All For Money
$12.70 CD Sale
Add to Cart

The Infamous Stringdusters
Laws Of Gravity
$22.50
Add to Cart