The story of a wanna be who got to be. 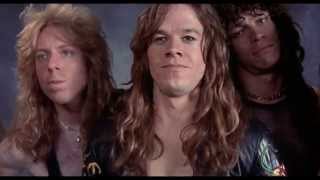 Mark Wahlberg plays Chris Cole, a local guy from Pittsburgh who is a copy-machine repairman by day (still living at home), and the lead singer of Blood Pollution, a Steel Dragon tribute band, at night. (Steel Dragon is a heavy-metal hair band living it big in the 1980s.) Cole prides himself on getting everything exactly right when he's onstage, every note, every costume, every shade of mascara; he even gets a nipple ring right after Steel Dragon's lead singer does. Chris's dream turns into reality when Steel Dragon fires its lead singer and brings Chris in to audition for the job. He gets the gig, but he also gets a lot more than he bargained for.

Wahlberg is brilliant as Cole, playing the role to perfection, both as the young dreamer and the rock star living to excess. Jennifer Aniston is also excellent as Emily, his longtime girlfriend and manager who stands by him for as long as she can. The music nails the 1980s heavy-metal explosion, both in the original songs that Steel Dragon plays and the incidental music, from such groups as Kiss, Jon Bon Jovi, Ted Nugent, AC/DC, Motley Crue, and Dio. As good as Wahlberg and Aniston are, Timothy Spall, as Steel Dragon's manager, nearly steals the picture. ROCK STAR is an invigorating, intoxicating, thrilling ride of a movie; at times it even feels like it's the true story behind Spinal Tap. (In fact, it is loosely based on the true story of Ripper Owens and Judas Priest.) As an added bonus, the film features, in small roles, musicians who have played with such metalheads as Dokken, Slaughter, Ozzy Osbourne, and more.