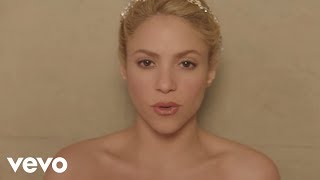 Recording information: CIA Dos Tecnicos, Rio De Janeiro, Brazil; Echo Studios, Los Angeles, CA; Estopa Estudios, Barcelona, Spain; Estudio Avioes De Forro, Fortaleza, Brazil; Groove Studio, Salvador De Bahia, Brazil; Harpoon Club House, London; Luke's In The Boo, Malibu, CA; Mesk Studios, Cairo, Egypt; Ocean Way Studios, Nashville, TN; Rokstone Studios, London, UK; Sant Feliu De Llobregat, Barcelona, Spain; Sonora Recorders, Los Angeles, CA; Swing House Studios, Hollywood, CA; The Ox, North Hollywood, CA; the Record Plant, Hollywood, CA; Westlake Recording Studios, Los Angeles, CA.
Photographer: Kayt Jones.
Like many eponymous albums, Shakira's self-titled 2014 set marks a new beginning: a new album for a new label after she got a new job. The new job was as a co-host on the hit American televised musical contest The Voice, the new label was RCA, and the new album was her first full-fledged pop album since She Wolf, the rather brilliant, hard electronic dance record that stiffed in 2009. She bounced back in 2010 with Sale el Sol, but that album wasn't made with the U.S. market in mind, something that certainly can't be said of Shakira. Opening up with a duet with Rihanna, and later finding space for her Voice co-host Blake Shelton, Shakira is determined to appeal to all audiences here: don't like the relentless dance of "Dare (La La La)"? Stick around for the reggae collaboration with Magic! on "Cut Me Deep," or maybe the appealing faux-folk of "23" or the full-bore adult-pop assault of "The One Thing," which may be the best cut here. Unlike Oral Fixation, which spilled over with so much ambition it couldn't be contained on a single disc, this is concentrated: every track has its purpose; none has excess. That doesn't necessarily mean that every cut is cohesive but Shakira is the rare pop star who can pull an album together through sheer force of personality. Whatever the setting, she not only sounds comfortable, she sounds powerful, and that goes a long way toward making Shakira a nice state-of-the-art pop album for America and the rest of the world. ~ Stephen Thomas Erlewine