He Walked By Night

A cunning and intelligent cold-blooded killer evades a massive police investigation in this true-life drama. 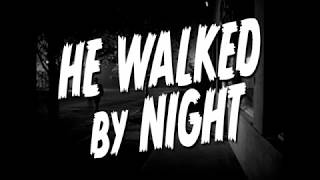 He Walked by Night (1948) - ClassicFlix Trailer

Based on one of the most notorious, unsolved cases in Los Angeles' police history, He Walked by Night stars Richard Basehart as the intelligent and cunning criminal who kills a cop, steals electronic equipment and robs liquor stores without leaving a clue. The Police Department persists in their search for him, systematically using the latest scientific methods of detection. The culprit is finally identified, leading to a frenetic pursuit through the massive drainage system beneath the streets of L.A. The documentary-like style and no-nonsense tone of He Walked by Night would serve as a blueprint for actor/director Jack Webb's "Dragnet." Webb, who portrays a crime lab investigator, bonded offscreen with Sgt. Marty Wynn, a technical advisor on the film and was subsequently invited to review L.A.P.D. case files. In 1949, "Dragnet" would debut on radio and would soon be followed by the successful and popular TV series.

A burglar becomes a cold-blooded cop killer and is hunted down on the streets of Los Angeles. The men in blue manage to track their suspect down into the bowels of the city--the labyrinth sewer system. Noir veteran Anthony Mann, though uncredited, co-directed the film. Well-done and supposedly an inspiration for Jack Webb's Dragnet TV series.

Customer Rating:
Based on 5662 ratings.


This film is well worth spending the time with. Richard Basehart is very good as the cold-blooded killer and it's sun seeing a young Jack Webn with the L.A.P.D. and not playing Joe Friday. There's only 2 negative thoughts about the movie: the overl melodramtic voice of the narrator and the failure to explain why Basehart's character becomes a thief and killer. Otherwise, sit back & enjoy.


What a great vintage move. To see such a young Jack Webb is priceless. A wonderful actor in his own right, Whit Bissell, is also very good in his roll as a very nervous business owner. Richard Basehart was excellent in his role as the cold-blooded killer of an LAPD officer. A movie worth adding to any collection!


An enjoyable film on many levels. Richard Basehart spent so much time in the role of Admiral Nelson in TV's "Voyage to the Bottom of the Sea", few people realize the range of his acting abilities or the depth of his performances. He plays a socio-psychopath to the hilt in this documentary-style police hunt. The modd of the film is constantly dark and brooding.
The script is a little thin in spots, some of the scenes could have been zipped up a bit and the acting is a bit lame in spots, but the story is strong enough to overcome these issues. Jack Webb plays the police lab guy far more casually than he would later play Joe Friday ("Dragnet") or tough drill TSgt Jim Moore("The D.I.").
It's also a great snapshot of the late 1940's: dress, attitudes, language, etc., as well as Hollywood's impression of reality. This film is well worth your time and money
(Unsolicited Testimonial: The Alpha catalog offers many fine films on DVD, and you can't beat the prices!)