This isn't the movies anymore. 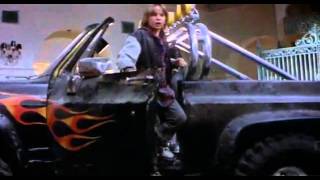 Arnold Schwarzenegger and director John McTiernan join forces again in, THE LAST ACTION HERO, a heart racing thriller in which a young boy uses a magical ticket to infiltrate his favorite movie. Danny (Austin O'Brien) passes through the movie screen and into the whirlwind life of crusader Jack Slater (Arnold Schwarzenegger) becoming his sidekick. But when the villains learn that they too can travel back and forth between cinema and reality, it's up to Jack Slater to put a stop their havoc wreaking.

Once a character in the "Jack Slater 4" film, Danny takes on the role of Slater's sidekick, and together they combat Vivaldi (Anthony Quinn), Benedict (Charles Dance), and The Ripper (Tom Noonan), an infamous troika bent on global malice. Trouble really however, when Benedict gets a hold of Danny's magic ticket, and travels to the real world laying waste to Times Square. Jack Slater leaves his cinematic bubble and follows the villain into reality--a reality where heroes don't always win.

Like a prophet armed with fire, director John McTiernan uses explosive action and booming special effects to foretell of a time when hyper reality will be achieved with the ease of buying a ticket to a movie.