They're on the bad side of the wrong man. 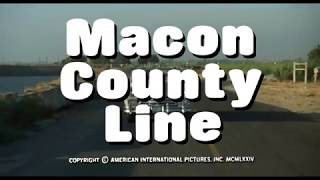 Shortly after entering a small Georgia town, three innocent young people are wrongly accused of brutally slaying the local sheriff's wife. Based on a true incident which occurred during the fall of 1954. A sequel, RETURN TO MACON COUNTY (starring Nick Nolte and Don Johnson), emerged in 1975.

Chris Dixon's been drafted, so he's out celebrating these final few days of freedom as best he can. While speeding down the highway during this precious time, he picks up a hitchhiker named Jenny, and they cruise along until his car breaks down in a small town.
The local authority, Deputy Morgan, takes an immediate dislike to the two, and demands that they get out of town. Chris and Jenny would happily comply, but then Morgan's wife is killed, and he becomes convinced that the couple is responsible for the murder.
Unfortunately, the deputy won't discover the truth until it's too late...