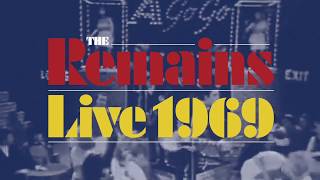 Liner Note Author: Mike Stax .
Recording information: The Boston Tea Party (03/16/1969).
In New England, few bands of the '60s are remembered with greater awe than the Remains. A garage rock outfit led by singer and guitarist Barry Tashian, the Boston-based group made a handful of outstanding records (including an album for Epic), appeared on The Ed Sullivan Show, and even opened for the Beatles on the Fabs' final American concert tour. But the Remains had trouble making an impression outside of New England, and they broke up in 1966. They had a reputation as an incendiary live act, but that legend lacked documentation until the 2000s. In March 1969, the Remains' original lineup played a one-off reunion show at the Boston Tea Party, Beantown's leading psychedelic ballroom, and after being lost for years in Tashian's archives, a tape of the show has surfaced and it confirms the Remains were as great on-stage as they were on their records. Live 1969 begins with the Remains tearing into "Hang on Sloopy" with an almost feral intensity, and for the rest of the set, they rarely let up, with Tashian's tough, defiant vocals and elemental guitar work matched by the stripped-down boogie of Bill Briggs' electric piano while the energetic rhythm section of bassist Vern Miller and drummer Chip Damiani pushes the music into overdrive. Even when they slow down for an improvised blues jam on "She's Nineteen Years Old" and a cover of Bob Dylan's "Like a Rolling Stone," this band sounds muscular and tightly focused, playing no-frills rock & roll informed by classic R&B and played with the passion of true believers. (The fury and sweaty joy of the performance are all the more impressive when one learns that the band hadn't been able to arrange a practice session before the gig, and went on-stage without having played together in close to three years.) The sole disappointment of Live 1969 is that the Remains only included one of their original tunes, "Why Do I Cry," in the nine-song set (their classic "Don't Look Back," which Lenny Kaye included on the 1972 compilation Nuggets, doesn't make the cut). But if you want to hear an approximation of what these guys laid out at teen clubs and off-campus beer joints in 1965 and 1966, this does the job and then some. Among garage rock obsessives, the Remains have long been the stuff of legend, and if anything, this live disc raises their standing among American bands of the mid-'60s. ~ Mark Deming

The Choir
Artifact: The Unreleased Album
$16.30
Add to Cart

The Remains
A Session With The Remains
$13.30 Super Savings
Add to Cart