All you need is love. 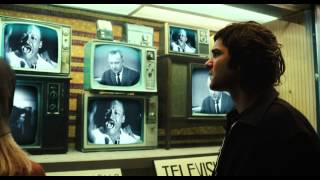 Across The Universe - Trailer

The Beatles' songs may have provided the soundtrack for the lives of those coming of age in the 1960s, but their extensive catalogue acts as the literal soundtrack in this romantic musical from visionary director Julie Taymor. Newcomer Jim Sturgess stars as Jude, a young man working on the docks in Liverpool. Eager to escape, he travels to Princeton where he meets Max (Joe Anderson). But it's his meeting with Max's younger sister Lucy (Evan Rachel Wood) that changes him. They quickly fall in love, but their relationship is tested by the chaos of the late 1960s and Max's unwilling tour in Vietnam. Throughout the film, characters burst into classics from the Beatles: frat boys sing "With a Little Help from My Friends," while Uncle Sam bursts from a recruitment poster with strains of "I Want You (She's So Heavy)." U2's Bono makes a cameo as a counterculture leader and croons "I Am the Walrus," and actor-comedian Eddie Izzard provides a trippy rendition of "Being for the Benefit of Mr. Kite."

Sturgess has the voice, charm, and good looks to fill Shea Stadium with hordes of screaming young women. As Jude, he's earnest and certainly capable of carrying the film. Wood capably balances Lucy's naiveté and knowledge, easily moving between her love for Jude and her passion for her cause. Though the performances are strong, it's Taymor's gifted direction that makes ACROSS THE UNIVERSE so fascinating to watch. As in FRIDA and Broadway's THE LION KING, she proves herself an artist with creativity few can match. Director of photography Bruno Delbonnel also deserves praise for his contribution to the striking visuals. He has worked with Jean-Pierre Jeunet on AMELIE and A VERY LONG ENGAGEMENT, and he brings the same sense of romance and whimsy to this unique musical.

60%off
The Beatles
Abbey Road Album Cover Magnet
$3.98 on Sale
Add to Cart