Get email alerts for Claudine Clark
Currently Out of Stock: We'll get more as soon as possible
Notify Me When Available
Add to Wishlist
Format:  CD
item number:  ZARE 0328
91% recommend us! 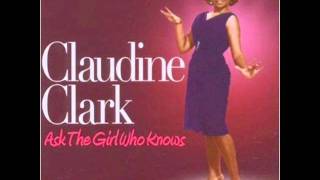 Record Collector (magazine) - p.88
3 stars out of 5 -- "The title track finds her developing a more soulful style, and she effectively hollers her way through the post-relationship angst of '(The Strength) To Be Strong.'"

Known as a one-hit wonder for her 1962 girl group-styled classic "Party Lights," Claudine Clark recorded an entire LP and various other singles, a couple under pseudonyms. This 24-track CD has most of what she cut prior to 1970, including some songs from the LP, various non-LP 45s (among them one-offs under the pseudonyms Joy Dawn and Sherry Pye), and a previously unissued longer alternate take of "Party Lights." Because Clark had more obvious talent than the usual one-hit wonder -- she wrote much of her own material, and had a degree in music composition -- you might approach such a collection in hopes that it contains a bunch of unfairly overlooked quality sides. The perhaps disappointing reality is, however, that like many a one-hit wonder, her big smash is much better and more memorable than anything else she cut. There are a bunch of slight knockoffs of the "party" theme from her LP; some too-obvious Supremes/Motown girl group imitations; some run-of-the-mill girl group and doo wop (including her obscure 1958 single "Angel of Happiness"/"Teenage Blues"); a little previously unissued material; and the strangely titled "Party Lights" follow-up, "Walkin' Through a Cemetery," which isn't quite as strange as you'd guess. The 1964 single "Easy to Love (Too Hard to Forget)" is a nice orchestrated ballad (co-penned by Clark) with some Dionne Warwick influence, but otherwise there aren't too many signs of artistic growth. So most listeners will remain happy with the presence of "Party Lights" on countless oldies compilations, though for those who want more Clark, this is the biggest and best such anthology, including thorough liner notes. ~ Richie Unterberger

50%off
Joanie Sommers
Johnny Get Angry
$9.98 on Sale
Add to Cart