Get ready to kick some grass!

141K ratings
Out of Print: Future availability is unknown
Notify Me When Available
Add to Wishlist
Format:  DVD
sku:  WKDV
92% recommend us! 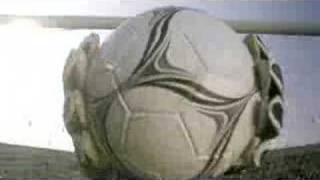 Hong Kong satirist Stephen Chow wrote, directed, and stars in this hilarious spoof of sports and kung fu movie cliches. Chow plays "Mighty Steel Leg" Sing, who can kick soda cans through walls, and is a natural soccer star in the eyes of crippled coach Fung (Patrick Se Yin), who is looking to challenge his arch rival Hung, the captain of the aptly named Evil Team. Recruiting Sing and his goofy brothers who all have names like Steel Head, Hook Kick Leg, and Weight Vest (with qualities to match), Hung's team soon rises through the ranks via their supernatural Kung Fu soccer skills. There's also a love interest in the form of a shy girl (Vicki Zhao Wei) who uses martial arts magic in making steamed bread. MATRIX-style digital effects elevate the actor's martial arts skills to ludicrous heights, giving the clichéd story such a giddy, high-octane boost it soars into a comic class by itself. Soccer balls ripple through the air like slo-mo bullets, smashing through walls, and flying thousands of feet in the air. A box office smash in the East, SHAOLIN SOCCER should prove irresistible to open-minded Westerners looking for a laugh-out-loud experience.

Shaolin Soccer
With tons of action, eye-popping special effects, and nonstop laughs, here's a hilarious martial arts comedy about a team of misfits who take their best shot at winning a championship! Sing is a skilled Shaolin kung fu devotee whose amazing "leg of steel" catches the eye of a soccer coach! Together they assemble a squad of Sing's former Shaolin brothers inspired by the big-money prize in a national soccer competition! Using an unlikely mix of martial arts and newfound soccer skills, it seems an unbeatable combination ... until they must face the dreaded Team Evil in the ultimate battle for the title!